In my last blog post about Traveling Ruby's future, I said that it's hard to democratize the development of Traveling Ruby because of System Integrity Protection (SIP). Traveling Ruby's build process relies on DYLD_LIBRARY_PATH, which is blocked by SIP. This means that:

After some research and experimentation, I've found an alternative to DYLD_LIBRARY_PATH, meaning that it's no longer necessary to disable SIP. This significantly changes the ability to democratize Traveling Ruby's development.

What did we use DYLD_LIBRARY_PATH for?

Before we get to the new solution, let's revisit how the old solution worked.

How does macOS locate library dependencies for a given executable?

Answer: an executable contains a specification of library dependencies. Each entry is a path to that library, e.g. "/Users/hongli/example/libyaml.dylib".

Here's an example which compiles a C program that does nothing, but is linked to libyaml:

We can use otool -L foo to inspect the list of libraries that this executable requires:

So here you go, foo contains information that says "I depend on /Users/hongli/example/libyaml.dylib". Note that his is a full path. That's different from Linux, where executables say "I depend on libyaml.so" (not a full path).

In many cases, it's useful to have the OS locate dependencies relative to the executable. For example, suppose we want to distribute the above program foo to another user. We'll need to package all its dependencies. Hypothetically we'll want to package it like this:

An executable's dependency list can be modified even after it's built, using install_name_tool. This tool is so called because each "path" in the dependency list is technically called an "install name".

So let's go ahead and modify our foo executable's dependency list:

Now, when we inspect the dependency list using otool -L foo, we see that it's indeed modified: 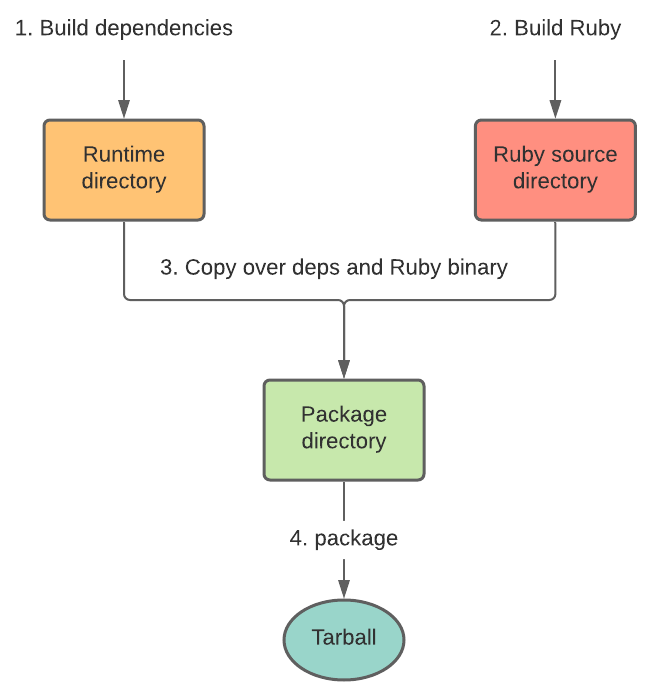 We used to solve this problem by setting the environment variable DYLD_LIBRARY_PATH to /Users/hongli/traveling-ruby/osx/runtime/lib. This tells macOS to look for libraries in the given directories.

Now that DYLD_LIBRARY_PATH stopped working on macOS systems with SIP enabled, it's time to look for a new solution.

New solution based on @rpath

Every macOS executable can embed a list of library search paths, or "rpaths". Whenever macOS encounters a dependency path that references "@rpath", macOS will search for that dependency in the embedded list of paths.

So unlike DYLD_LIBRARY_PATH, which is set during runtime, the library search paths are embedded in the executable, which Apple seems secure enough to not block via SIP.

Some useful facts about rpaths:

Here's an example. Let's build a C program which does nothing but is linked to "/Users/hongli/example/libyaml.dylib". We also ensure that we add an rpath to this executable.

When we inspect the executable's list of rpaths with otool -l foo | grep LC_RPATH -A2, we see:

However, just having this rpath entry is not enough. When we examine the dependency list with otool -L foo, we see that the reference to libyaml.dylib is an absolute path.

So when we start foo, macOS will ignore the rpath, and will still locate libyaml in /Users/hongli/example. We can verify this by moving libyaml.dylib, and observing that foo fails to start:

So we change foo's dependency list to reference "@rpath":

Now it works as expected. Suppose you package up foo and libyaml.dylib according to the package structure described earlier. If your friend extracts the tarball to "/Users/xiangling/foo" and runs /Users/xiangling/foo/bin/foo, then here's what happens:

So the final solution is as follows:

Now that it's no longer necessary to disable SIP, developing Traveling Ruby is a lot less of a hassle, and it paves the way to building on hosted CI services.

I'm a software developer, consultant, CTO and entrepreneur. I mentor people to help them grow. For 20 years I’ve been building tools that make people happy. I believe that software development and work should be fun.